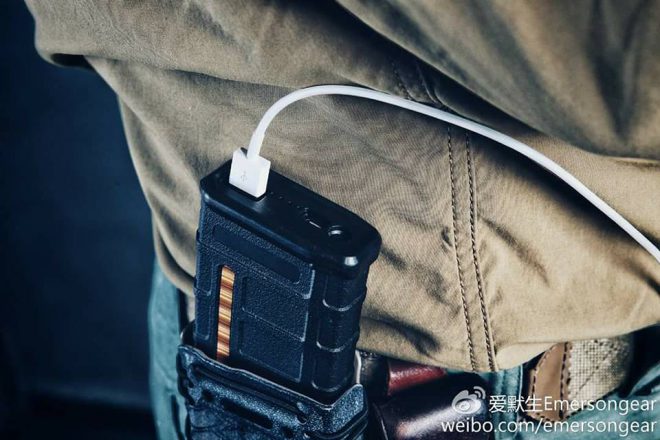 The PMAC charger comes with  a dust cover and at the time I ordered these, the FDE versions did not have FDE base plates.

The PMAC style powerbank is just a phone charger made to look like a PMAG. It does not feed any ammo or even airsoft BBs. It is aesthetics only.

The PMAC style powerbank comes in a wooden box made to simulate a crate. Not bad packaging. I like it for the aesthetics however I think Emerson could have opted out the premium packaging and sold these for less. They are $18 each. I ordered two one in tan and the other in black from jkarmy airsoft store last March hoping I would get these in time for the NRA Annual Meeting.

The PMAC style phone charger can fit inside an AR15 as seen below. I inserted the black one into a TROY PAR in .300blk. Their PMAC Powerbank is similar in style to a Magpul PMAG. However it is not the same. At first glance they look similar but subtle changes make it different from a PMAG. You can see the differences in the photo below. The PMAG is longer and the PMAC bodies have four recesses rather than the three on the PMAG right infront of the window. The PMAC bodies have a mottled texture that is rougher than a PMAG.

The PMAC charger body has a sticker on the inside that looks like a stack of 5.56 ammo is in the window. I removed the stickers on the tan PMAC. The right side of the PMAC and PMAG are different as well.

Here is the PMAC inscription. Now compare that to the PMAG below. INSIDE THE PMAC CHARGER

The PMAC powerbank is basically an insert that goes inside the faux PMAG body. It houses 3x 18650 li-ion rechargeables. Below I just used random 18650 batteries. It is recommended that you use the same brand and model 18650s when using multiples in an electronic device. The real Magpul PMAG on the left has been modified to allow the PMAC insert to be inserted into the PMAG body. The PMAC magazine body is made of a weak plastic. You can see how I am squeezing the sides and it flexes. The dust cover does not snap on very solidly and is too easy to remove making it pretty much useless. You can see the charger insert does not reach all the way to the top of the PMAC body. With the extra space, you can store your smart phone USB cable inside and cap it off with the dust cover. Sadly a real PMAG dust cover won’t work as it is not the right shape for the PMAC mag body. 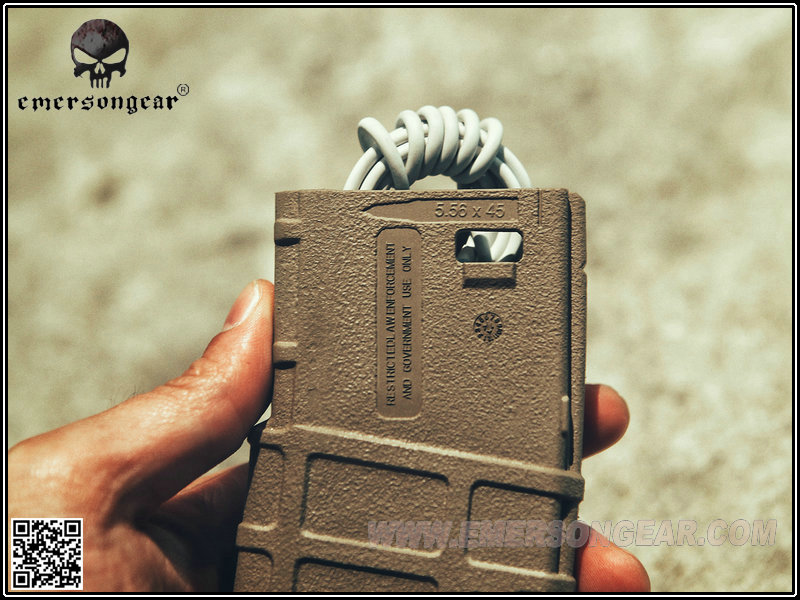 Apparently there are two different versions of the PMAC phone charger inserts. One is taller than the other. This is a recent development that i came across just a couple days ago. Mine are the shorter variant and I prefer the shorter version. 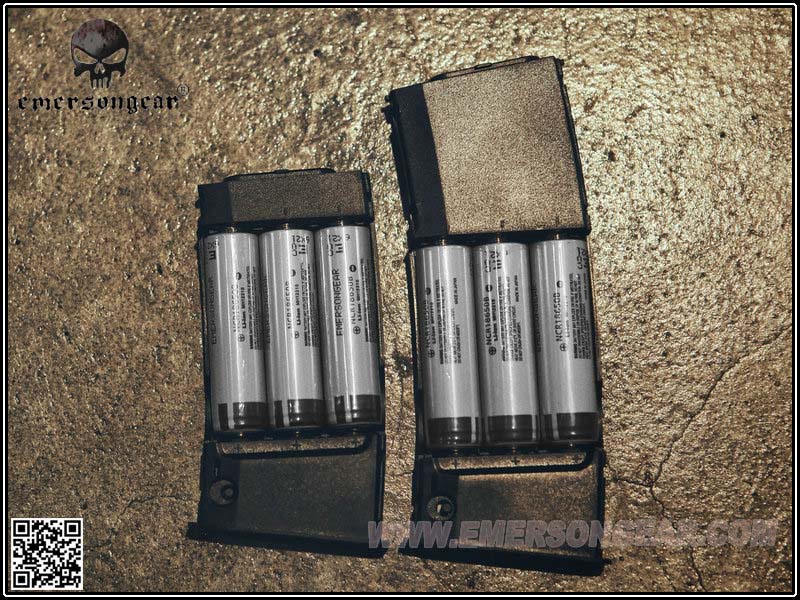 I opened my PMAC charger insert to see what the innards looked like. So my guess, is the longer variant in the photo above is just eampty dead space. There shoud not be any functional parts above the battery contacts. The shorter insert has an added benefit. Both inserts appear to have the same oval molded at the top. It looks very similar to the floor plate of the PMAG magazine spring. In fact, it is compatible with PMAG springs. This got me thinking, if I could install this insert into a real PMAG, I could use a shorter PMAG spring and follower and possibly have a functioning PMAG that can charge my phone.
I took the charger insert and tried to put it inside a PMAG. The side wall protrusions interfere with the charger insert.

So I enlisted the help of my machinst friend, Keith Biddle, and had him mill away 5 inches of protrusions from the bottom. I wanted to keep the railed protrusions near the top since that is what helps guide the PMAG follower.

Below are two real PMAGs. The black one is unmodified while the FDE one has been modified. Here is the dissassembled PMAG phone charger. I cut the magazine spring short but kept it a little longer than the space left in the PMAG. After I made the video, I modified the follower. I thought perhaps the follower was bottoming out too soon and that was limiting me to only 5 rounds. Sure enough, after chopping the follower I was able to fit 3 more cartridges in the PMAG phone charger for a total of 8 rounds. 8 rounds is a bit tough to feed into the gun on a closed bolt. So either I can download to 7 rounds or insert on an open bolt. I used a gen 2 windowed PMAG as a host for the phone charger. However I see no reason you could not use a gen 3 PMAG. I was hoping that there would be enough space in the PMAG to fit 10 rounds of 5.56 but unfortunately there is not. Next I plan on modifying a 40rd PMAG. I should work and give me even more capacity.  I am hoping for 20 rounds but suspect I will only get 15 rounds with the phone charger insert inside.

This project was not cheap. Here is a breakdown in cost to make a functioning PMAG phone charger.

That comes out to just $98 in parts and that is not including taxes or shipping for some of those items. Then add on the custom machining of the PMAG to get the charger insert to fit inside the magazine.

That puts the phone charger PMAG cost over $100.

If you are interested in making your own PMAG phone charger, you can start by getting a PMAG from our website. They are as low as $11.95 right now.  Click here to check out our selection of PMAGs.